A Modest Proposal on Mahatma Gandhi 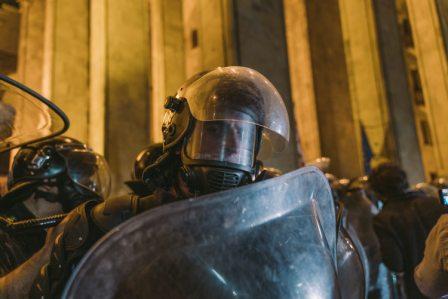 Mahatma Gandhi is such a legend that his aura looms gigantic in our consciousness. We cannot think him to be more than just a statue standing in a public place. It seems that in modern day his place matches best on currency bills. It is our tribute to him that we feel dutiful towards his stature. In fact we have made him immortal but we have forgotten his values. We are helpless that today we cannot adopt his ways of truth and non-violence. Is it practical today to be Gandhian in thought? If yes, then is it practical to be Gandhian in approach? We can cheat the crowd while presenting a speech on 2nd October but how can we cheat our own persona? The director of the movie Lage Raho Munna Bhai, Rajkumar Hirani accepted that it was his interest to regenerate curiosity for Gandhi. He thinks that India has forgotten the real Gandhi because Gandhi is not a person but an ideology. This ideology is tough to follow and a modern man is so lazy that he has forgotten to work like Gandhi. We are living in a waste land where we have been cursed that we can never have eternal joys. This article presents a question on the relevance of Gandhi in modern times.  When Barack Obama spoke at Wakefield High School in Arlington on September 8, 2009 he admitted that Gandhi was the real hero for him. Even Dr. Martin Luther King was inspired by Gandhi. He was the man who made aware the common people about their strength. It is worthy to quote Obama here-

“He is a hero not just to India, but to the World.”

In 21st Century if Gandhi can inspire people like Obama who ranks top among the most powerful men on earth then it is also correct to say that countless statesmen, Philosophers and writers must have found him a source of inspiration. In 1939 Albert Einstein has remarked that-

“ Gandhi was a leader of his people, unsupported by any outward authority: a politician whose success rests not upon crafts nor the mastery of technical devices, but simply on the convincing power of his personality; a victorious fighter who always scorned the use of force : a man of wisdom and humility, armed with resolve and inflexible consistency, who had devoted all his strength to the uplifting of his people and the betterment of their lot: a man who had confronted the brutality of Europe with the dignity of the simple human being, and thus at all times risen superior.”

It was the divine power of truth and non-violence which made Gandhi an apostle and leader. He dedicated his life to the betterment of human race. It is natural for people like Einstein and Obama to idolize Gandhi but we cannot escape realism. These qualities are rarely found in any leader of contemporary India. This is one of the reasons that today Gandhi and his thoughts are questionable. This article does not intent to blur the vision of Gandhi but to shed or focus some light on his legendry thoughts. Today the world is in crisis and from every crack our sentiments can hear the name of Gandhi. George Orwell has remarked in Reflections on Gandhi that-

“Saints should always be judged guilty until they are proved innocent.”

It is known to us that over twelve thousand books have been written on Gandhi which can fill the modern wasteland with love and compassion. Today is the time to keep his stature in our heart so that we can understand his values which was based upon truth and non-violence. For many people who represents communalism the assassination of Gandhi was a matter of esteem. It is shameful but we cannot escape the reality. Joseph Lelyveld who is also the Pulitzer Prize winner has written the biography of Gandhi entitled Great Soul: Mahatma Gandhi and His Struggle With India in 2011. In this book we can find pity and disregard for Gandhi mixed together. For Gandhi truth was not an object for jest but today it is zestful. It is zestful because it is ironical in terms of validity. For Gandhi it was not merely an abstract notion but it was actually the value of human kind. It was a kind of experience which was experiments by him on his life. It was experimented on certain code of conduct. Such code of conduct is extremely painful. If we have a glimpse on the pages of his autobiography we can find that for him truth was directly related to his own sphere of action. His innocence and reason for truth was Socratic in nature. It seems that his soul acted like a scanner in which he could locate his hardship with truth and non-violence. He was a lawyer by profession and we all know that a truthful lawyer is a wasteful product in modern society. In his autobiography he has mentioned that-

“I had learnt the true practice of law. I had learnt to find out the better side of human nature and to enter men’s hearts. I realized that that the true function of a lawyer was to unite parties riven asunder. The lesson was so indelibly burnt into me that a large part of my time during the twenty years of my practice as a lawyer was occupied in bringing about private compromises of hundreds of cases. I lost nothing thereby, not even money, certainly not my soul.”

The courts in function would be superfluous if modern lawyers could find inspirations by such experiments. It is equally applicable to all the professions because it is based upon truth and non-violence. Someone may argue that relevancy of Gandhi in modern period is a futile attempt because today we can witness moral decay on a large scale. Today if we visit any Government office we can find the picture of Gandhi hanging on the walls but in reality his values have been hanged in the modern wasteland. I believe that history repeats itself and I have a vision that Gandhi and his thoughts is the savior. We can be blessed eternally only if we follow the paths of truth and non-violence.